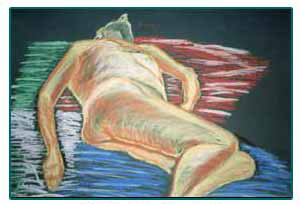 When I modelled for a crucifixion! (essay)

Passion Play: CRUCIFIED AS ST DISMAS
Greetings everyone, and may I wish all members and supporters of Art Nude UK a happy, prosperous and successful new year.

Since I last penned my thoughts, this part of the world was devastated by the appalling floods so graphically shown in the media. When you consider the sheer misery and disruption to people's lives over such a wide area and for so long, it makes one feel both angry and frustrated that one couldn't do more to help. I was able to give accommodation to a couple of life models I know who were flooded out of their home outside Carlisle and wanted a break from the disruption, and I also thought the least I could do was to donate the money I earned from life modelling before Christmas to the Daily Mail Flood relief fund.

Anyway, the world of life modelling carries on, and Alan is currently working on a massive up-date and makeover over the website - the number of members is continuing to increase, and we are on course to being the most successful medium for bringing together figurative artists, models, tutors, in fact everybody who celebrates the beauty, purity and innocence of the nude human body. And don't forget that this website exists for you, the members: we're anxious to hear any comments, suggestions, and especially accounts of members' experiences when in front of a class or anywhere else.

It's quite striking how diverse the world of nude life modelling is: as I mentioned in my last letter, I have been signed up by a Professor of Musculoskeletal pathology as a demonstration body for his series of weekly tutorials arranged by the Liverpool School of Medicine. A very different world from a conventional art studio! It requires me to be stretched out naked on an aluminium table as the professor expounds to half a dozen students at any one time the relationships and physical interlinking between the various limbs of the body . The tuition also helps to familiarise the students with the geography of the body, as it were, and to overcome any cultural apprehensions over touching and handling the nude human form. One thing that strikes me in modelling in this metier is that everyone is so serious and formal - in fact, I feel depersonalised when lying there, as though I am seen as purely a piece of meat. Everyone refers to me in the third person, and there is none of the warmth or wit one generally gets from, say, a class of artists consisting of retired folk....But perhaps I am being unfair. I feel that my role in facilitating the education of medical students is vitally important and that I owe them something. especially as I nearly died a couple of years ago from sepsis pneumonia and was brought back to the land of the living by the skill of Warrington General Hospital. If my naked body helps their understanding, then so much the better!

Another feature of modelling for medical tuition is that when we disrobe preparatory to a life session, we provide our own robe to cover our bodies. The School of Medicine (and this goes for other medical schools I have worked for) told me that this was not permitted. instead, they provided, in the small changing area, a small pile of skimpy grey cloths, secured at the side by a piece of Velcro. Apparently this was in the interest of hygiene, something I did not quite follow- still, it's their rules. Actually, I thought the cloth was quite erotic, as I made my way along a short passageway and down a set of stairs to the anatomy room, my wobbly bottom on display for all to see.

Also last time, I told you about Gregory, the senior model from Uttoxeter whom I helped to get started. We've done quite a few "gigs" together, and we've become quite an item: the physical contrast between our two bodies has inspired quite a few artists: in fact, we're both going to be participants in the Passion Play which I think I mentioned some while ago, and which is being set up by a Christian Nudist sodality to take place on 25th March. I am to emulate Dismas, the "good thief" who was crucified, whilst Gregory will be Gestas, the unrepentant thief who denied Christ. It is significant that 25th March is both Good Friday and the Feast Day of St Dismas. As I understand it, the event will be put on social media, You Tube I believe.

My essays on the internet which I mentioned last time have certainly brought forth some interesting responses and new contacts: one of them particularly worth mentioning is Jim Furnivall, a figurative artist based outside Oldham. he is fascinated by Oriental philosophy, custom and lifestyle, especially where there is a connection with nudity. I very much link into where he is coming from and I share his views and outlook on life: so, he is now using me as his "muse" to inspire him in creative drawing. He is very much into the concept of Tai Chi, and its grace, calm, simplicity and spirituality. To see Tai Chi perform naked is beautiful, and he runs sessions where I am used as the model for the whole gamut of Tai Chi movement. And there's more to him than that - he has also chosen me as his model for the art of "Shibari". This is an ancient Japanese form of rope bondage - it is spiritual and it is erotic, and is as valid a life art as is drawing or painting . It involves the practitioner creating geometric patterns and shapes with rope or cords, which contrast beautifully with the natural curves and the texture of the naked human body. The model is the canvas, the rope is the paint and brush. The aesthetic arrangement of ropes and knots on the model's nude body emphasizes the characteristics of sensuality. vulnerability and submission. For those interested, Jim conducts tuition sessions in Shibari, which include photographing and sketching me.

Oh yes- the social gatherings I mentioned last time are continuing (we had a good one in Tarvin, near Chester early in January) and if anyone wants to meet up, don't hesitate to let me know via email!!

Good luck to everyone